how to change the world- my view

Yesterday night I was having dinner with a friend and I told him that our India office is closed tomorrow because of shutdown strike called by opposition party. Then the discussion went on to India, its politics, Oil price and global issues at large. My friend said that when he was in college he wanted to do something to change the world- to make it a better place!

When I woke up today morning the same topic came back to my mind and how a person can contribute to make this world a better place?

The world is made up of individuals. We all suffer. We all go through bad relationships, difficult jobs, hard life experiences, loss, pain. In fact, that’s what most of life is.

Everyone is coming up with a new smartphone "App" claiming that they will change the world.  No app will do that. The only way the world will change for the better is to improve yourself everyday.

Posted by Manjeet at 1:31 PM No comments: 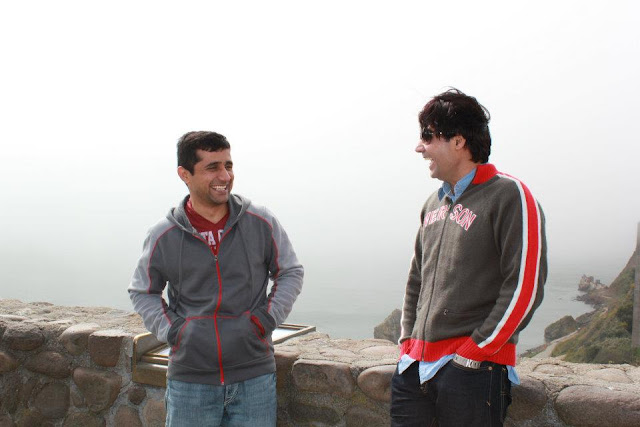 When was the last time you felt complete happiness? Completely free- just enjoying every second?

Yesterday is long gone. Tomorrow will never come. I’m happy today, with my bread, with my smile, with both feet flying in the air. Like a bird

My simple goal in life is: I want to be happy. I want every day to be as smooth as possible. No hassles.
Posted by Manjeet at 2:29 PM No comments:

How to Remotely Control Your PC using Vpro-AMT

I need to show up a demo today from my client hyper-visor machine. Currently we use virtual room to do the demos for remote people, but since we do not have a virtual room client for linux and my Dom0 client is completely closed so I was looking for a way to show the console screen of my machine in the demo.

I was able to achieve it by following steps on HP 8460 p machine:

Intel vPro is a management platform built into Intel processors and other hardware that allows companies to manage their desktops and laptops out-of-band (OOB). That means the computers can be managed no matter if the computer in on or off, and even if the operating system has failed or there is no hard drive present.

Make sure machine has vPro+AMT support in the processor and BIOS.

Once you have AMT capable system,  continue on to configure Intel AMT KVM.

The first thing you will need to do is turn on BIOS verbosity. Reboot your computer and enter your BIOS configuration. Look for something labeled firmware verbosity or boot verbosity and make sure it is turned on. Likewise, if there is an option for an AMT setup prompt make sure that is turned on as well.

Restart your computer and just after the BIOS splash screen you should see a second setup screen that looks something like the image below. Push Ctrl+P at this screen to enter the Management Engine BIOS Extension (MBEx) to configure Intel AMT. Once you are logged into the MEBx, go to Intel Management Engine and then select activate network access.

Type Y to accept the warning that pops up about activating the ME network interface.

Next select network setup and then Intel(R) ME Network Name Settings.

Select host name and put in your computers name. You technically could put in anything you want here but it may cause problems with DNS if the Intel AMT name is different from your computer’s name. From here verify that SOL, IDER, and Legacy Redirection Mode are all enabled. Return to the previous menu and then select KVM Configuration.  Make sure KVM Feature Selection is enabled. From here change User Opt-in so that user consent is not required for KVM session.

Push escape three times to exit the MEBx menu and push Y when prompted if you are sure you want to leave.
---

Once you have BIOS things enabled you can use vnc viewer plus client to connect remotely
To find the IP address- when machine boot press CTRL+ALT+F1. This should show the IP address.

You will be prompted for your Intel AMT KVM password.

And a VNC connection will be established with the AMT KVM server. Posted by Manjeet at 2:09 PM No comments:

2.  Explain how python is interpreted.
Python program runs directly from the source code. Each type Python programs are executed code is required. Python converts source code written by the programmer into intermediate language which is again translated it into the native language / machine language that is executed. So Python is an Interpreted language
3.  Explain the disadvantages of python.

--------
7. Describe how to use Sessions for Web python.
Sessions are the server side version of cookies. While a cookie preserves state at the client side, sessions preserves state at server side.
The session state is kept in a file or in a database at the server side. Each session is identified by a unique session id (SID). To make it possible to the client to identify himself to the server the SID must be created by the server and sent to the client whenever the client makes a request.
Session handling is done through the web.session module in the following manner:
import web.session session = web.session.start( option1, Option2,... )
session['myVariable'] = 'It can be requested'

• First create a script file and write the code that has to be executed in it.
• Make the file mode as executable by making the first line starts with #! this is the line that python interpreter reads.
• Set the permission for the file by using chmod +x file. The file uses the line that is the most important line to be used:
#!/usr/local/bin/python
• This explains the pathname that is given to the python interpreter and it is independent of the environment programs.
• Absolute pathname should be included so that the interpreter can interpret and execute the code accordingly. The sample code that is written:

import struct
f = open(file-name, "rb")
# This Open() method allows the file to get opened in binary mode to make it portable for # use.
s = f.read(8)
x, y, z = struct.unpack(">hhl", s)
The ‘>” is used to show the format string that allows the string to be converted in big-endian data form. For homogenous list of data the array module can be used that will allow the data to be kept more organized fashion.

12. Write a program to show the singleton pattern used in python.
Singleton patter is used to provide a mechanism that limits the number of instances that can be used by one class. It also allows the same object to be shared between many different parts of the code. This allows the global variables to be used as the actual data that is used is hidden by the singleton class interface. The singleton class interface can have only one public member and one class method Handle. Private constructors are not used to create an object that is used outside the class. The process waits for the static member function to create new instances and return the singleton object. The code that is used to call the singleton object is:

14. What is Docstring
Python documentation strings (or docstrings) provide a convenient way of associating documentation with Python modules, functions, classes, and methods. An object's docsting is defined by including a string constant as the first statement in the object's definition. For example, the following function defines a docstring:

15. Write a program to print all the contents of a file

print f1.readlines()
Print the length of each line in the file 'file.txt' not including any whitespaces at the end of the lines.
f1=open("filename.txt","r")
leng=f1.readline()
print len(leng) -1, "is the length of the string"

Since the last character is a whitespace we deduct 1 out of the length returned by the len() function.

18 What do you know about various Python GUI frameworks and
the pros/cons of them (tkinter, wx, pykde, etc)

19Where do you go with Python related questions (c.l.p,
google, google-groups, etc)
20. General- Tabs vs. spaces, and their reasoning. choice of editor/IDE?

Posted by Manjeet at 4:07 PM No comments:

Networking- What happens after you type a URL into a browser

One of the networking related question I love to ask during interview.

Explain what happens, step by step, after you type a URL into a browser.  Use as much details as possible.

1. Browser contacts the DNS server to find the IP address of the URL.
2. DNS server returns the IP address of the site. If your DNS does not know the IP, it will send the request to next forwarder DNS.
3. Browser opens a TCP connection to the web server at port 80. If its an HTTPS URL then it goes to port 443
4. Browser fetches the html code of the page requested.
5. Browser renders the HTML in the display window.
6. Browser terminates the connection when window is closed.
Posted by Manjeet at 5:52 PM No comments:

I was trying to make Windows DomU work on Ubuntu+Xen setup. I have to spend couple of hours to find out in what sequence we should do the installation and configuration.

Ubuntu support xen officially from 11.10 version. But there is some issue while creating DomU. Here find some easy step to configure xen 4.1 on 64 bit version of ubuntu 11.10 and solve issue in DomU creation.


If this command does not return any error, then the installation is correct.

If got output like this, you have installed every package correctly.

Type $sudo virt-manager for getting GUI for virt-manager
Create new VM using virt-manager(Learn More)
Solution for common error during DomU is given below.. 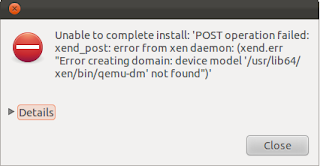 Posted by Manjeet at 5:38 PM No comments: