My attempt for generosity- Donate blood, give life

I wanted to do blood donation two times this year. This is one of the bucket list items I put when year 2012 started. I called up the Stanford blood donation center on Friday (10/19/2012) and setup an appointment for Saturday morning.

Instead of going alone, I also made an appointment for one of my friend (without asking him). I send him a message- You are coming with me! I was very excited and woke up early morning. Picked up my friend and reached the donation center on time.
When I went inside for screening the lady asked me when did I travel outside of US. I said in January, which was 10 months ago. She smiled and said I can not donate because I have to be in US for 1 year continuously.

I was little disappointed. I wanted to do some generous work. I can not donate in year 2012 and my goal will remain incomplete :(

Anyway, I am hopeful and that I will not travel outside of US until January and would be able to donate in 2013.
==
OK, so fast forward to January 19, 2013. Here I am doing the Donation. Its feels good when your pending goal becomes complete and that also when you are doing a work of Generosity!. 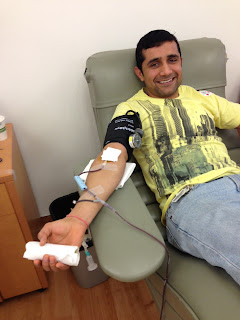